Squirt guns are about as iconic to summertime as BBQs and fireworks. For kids, they’re practically a summer necessity. Even adults might be tempted to goof off with squirt guns now and then. For something as simple as spraying water, squirt guns have seen popular phases and technological shifts. Such shifts bring new deigns and often, mainstream attention. So let’s dive in and take a look at the history of this water blasting summertime staple.

Handheld squirt guns probably date back further than most people think. There are historical mentionings of water guns as far back as the middle of the eighteenth century. Though, patents for squirting guns didn’t appear until the 1880s. An advertisement from 1896 shows a cast iron framed squirt gun that was probably more often used to squirt chemicals in other’s faces rather than for playing. This early design had a squeezable handle, essentially just a rubber bladder. This design was similar to those used in trick-flowers; these began appearing around 1906. Perhaps at some point, wealthier children had access to these early squirt-guns, but the bladder design was pretty limited. It only offered one or two good shots of water. Syringes had been invented in the 1840s, and though these could shoot water, they were relegated to medical purposes. They are significant since they come into play later on.

In the 1920s, spray bottles began to using a trigger pump design that is still common on spray bottles today.  This trigger pump was soon applied to squirt guns, and the first multi-shot squirt guns began appearing. Early designs were actually made of tin—they leaked eventually, and rusted. 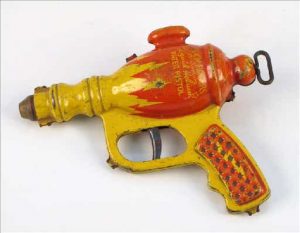 The first really popular mainstream squirt gun came out in 1936. This model was based on a Buck Rogers weapon, and if you don’t know who Buck Rogers is, then you aren’t missing out on much. Basically, the squirt gun had a sci-fi look to it.

Tin was the material of choice for squirt guns until the 1950s. By then, plastic was invading the manufacturing sector, and in the case of squirt guns, plastic made a lot of sense. (The 50s was also when balloons were first m

arketed for use as water grenades.) Plastic allowed for cheaper manufacturing. Squirts guns even began to appear on TV ads during that most holy of children’s television programming, Saturday morning cartoons. Plastic also allowed for more mold-ability. Realistic looking guns began to appear in the 60s, and these met with some unfortunate accidents over the years, and were eventually outlawed in the 80s. 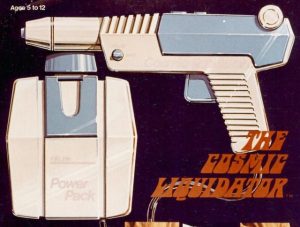 an obvious variable for improvement. For the Cosmic Liquidator, the battery pumped water and constant pressure meant the gun shot more water than any gun prior. But, the water gun ate up expensive batteries. As much as water and electricity don’t seem like an obvious mix for a kid’s toy, more battery-powered water guns would come out in the next decade. 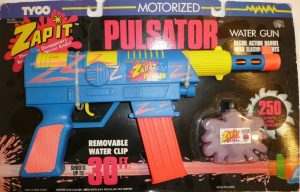 In 1985, Zap-It water guns came out and these used batteries to power a trigger pumped system, essentially making a squirt gun automatic. Zap-It guns were expensive, and they had the same reputation for eating batteries. Besides, the biggest technology jump in water warfare was about to kick Zap-It to the curb.

The design for using air pressure to help spray water was first thought up in 1982. An inventor spent years building a prototype gun that was met with, well, a rather dry response from the toy industry. Many toy companies thought the super-soaker prototype had little to offer in an already saturated industry. High-end water guns just didn’t do all that well. Then a small toy company called Larami decided to give the gun a chance. In 1990, the Power Drencher came out—technically, this thing was a Super Soaker 50, but it wouldn’t be called that until ’91 when Larami created the Super Soaker brand. They not only renamed the product, but their new marketing campaign quickly changed the world of squirt gun fights.

Super Soaker commercials appealed to a kid’s basest fears and desires. Ads featured kids getting revenge by using Super Soakers against neighborhood bullies. They also showed kids that without something better than a trigger-pump squirt gun, they were doomed…to get really wet. The commercials helped, and the product spoke for itself. Super Soakers were well made toys that did something no water gun had done before. They made squirt guns bigger and better, and with kids manually having to pump them, came without a need for batteries.

The air-pressure water system was under patent, but the toy market jumped on the Super Soaker wave. Manufacturers made improvements on older designs. For example, a brand called Liquidator designed models of syringe based guns that pulled water from a tank and offered several good shots. This syringe-design was soon attached to whole backpacks that held gallons of water. Zap-It brands released better automatic trigger-pumps. These other brands did manage to make some good squirt guns, but Super Soaker reigned.

Through the 90s, Super Soaker used a number system to denote size and power on the

ir expanding line. There were so many squirt guns that whole aisles of toy sections were dedicated to water warfare. The guns kept getting bigger too. Super Soaker made some guns that were so powerful, parents became concerned over safety. The 300 and XP 2000 Super Soakers were practically hoses. Many of these larger squirt guns were really expensive, and they were so efficient that even good Super Soakers seemed obsolete next to them.

The Super Soaker brand remained so popular over the years that when Larami was bought by Nerf in the late 00s, the Super Soaker line continued. Nerf did scale back on the large and most powerful of guns, and this was probably a good decision. See, for a kid personally invested in the Super Soaker hype of the 90s, there was a point when water fights became far less fun. What was once a good long activity with friends and neighbors turned into everyone getting soaked within minutes, or sometimes seconds. It became less fun to have to invest in expensive equipment, and perhaps this was an overall general outlook many other kids had. Alas, the Super Soaker fad faded into the 00s, but it does still remain a very reliable brand.

Squirt guns aren’t going anywhere soon. They pop up in stores when the weather gets warm. There are still various options, from generic to high end. As far as toys go, the squirt gun has had a long history full of many changes and improvements. Long may the squirt gun invade store aisles, annoy parents who don’t want to get wet, and be a summertime staple that helps kids cool off.